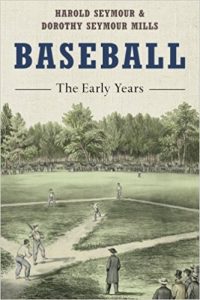 Based in part on the first doctoral dissertation ever accepted for a degree, this book is also the first by a professional historian to be devoted to the history of baseball. It traces the growth of the game from a boyish pastime to an amateur sport for gentlemen, and then to a highly organized business monopoly, carrying the story of our national game down to 1903.

PART FOUR – Monopoly At Its Apex
22 Monopoly Rides High
23 The Game on the Field in the `Nineties
24 Monopolistic Morass
25 The National League Meets Its Match
26 Players, Fans, and Umpires
27 The American National Game
Bibliographical Note
Index

Early in 1960 Sheldon Meyer, Dr. Seymour’s editor at Oxford University Press, wrote congratulating him on the acceptance of his manuscript, “Baseball: The Early Years,” for publication. “There was genuine enthusiasm for your project in the [editorial board] meeting . . . you have produced a most readable manuscript. . . .It strikes us as an important contribution to the study of 19th century American society.”

Before publication, Meyer sent the manuscript out for review by two knowledgeable people, one a sports writer and the other a historian. John Kieran, who for years wrote the New York Times column “Sports of the Times,” after reading the manuscript responded to Oxford that it was “the best detailed history of the rise of professional baseball that I have yet encountered” and “shows evidence of enormous research. . . . invaluable.” The other evaluator, Professor Harvey Wish, also wrote a letter of high praise.

When Baseball: The Early Years came out in 1960, reviews emphasized the number of myths it debunked. The New York Telegram and Sun pointed out that “unlike many of the so-called histories of baseball, which merely repeat the same tired legends,” the book is “a serious and dramatic study of the game.” The Sunday Oregonian said the book “exploded a dugout full of myths.” But a Michigan paper said that Seymour “isn’t debunking, he’s just getting at the facts.” The book, said the Chattanooga News-Free Press, “clarifies many misconceptions” and “unravels a maze of legends.” For example, the Detroit News Call-Bulletin pointed out, “Professor Seymour has put the final crusher on the legend” that General Abner Doubleday invented baseball in 1839 by presenting proofs that baseball was played as early as 1744 in London, England.

BASED ON FACTS AND ANALYSIS

Other reviews paid tribute to the book’s factual base. It “represents a tremendous amount of research,” marveled the Cincinnati Enquirer. The Washington, D.C., Army Times, surprised to learn of the amount of baseball play in early military history the book revealed, said it was “fascinating,” the “the most thorough and entertaining of all the books written about baseball’s early years.” The Baltimore Sun called it “a literary home run,” praising its “impartial attitude” and “analytical approach.” The Newark, New Jersey, News recognized Seymour’s “unquestionable affection for the game” and said the book is “in a different league than previous baseball histories.”

A DIFFERENT KIND OF BASEBALL BOOK

Three Chicago newspapers reviewed the book. The Tribune called it “a convincing and interesting account of the national game, . . a genuine contribution to the literature.” The reviewer said it “manages to give life to the dusty records of the last century, . . a genuine contribution to the literature of the game. The author, he said, “writes clearly and logically” and “manages to cover a tremendous amount of ground without becoming weary or wearisome.”

The literary editor of the Chicago Daily News called it “fascinating” and added, “In my league, Dr. Harold Seymour has poled one clean out of the park.” And the Chicago Sentinel reviewer realized that the book was “not the usual kind of sports writing-and not the ordinary sort of book, either! [but] a history, a serious one, well-written and emphasizes baseball as a business not a game. And it has some shockingly revealing pages.”

John Barkham of the Saturday Review syndicate declared, with the right figure of speech, “Right off the bat, let me say that this history of baseball stands in a class by itself.” He called it “the best I’ve ever read on the subject . . . informative and myth-shattering. . . . crammed with revelations . . . a uniquely valuable contribution to the game.”

Sportswriter Lee Allen, eager to review the book for the New York Times, wrote the newspaper’s editors, calling the book “the first scholarly history of baseball ever written, thoroughly documented, yet rich in anecdotal material . . . a landmark in the writing of baseball history.” Over the years, and especially after Lee was named historian for the Hall of Fame in Cooperstown, he became a personal friend, and we maintained a lively correspondence with him until his death.

Harold Rosenthal of the New York Herald Tribune called the book “the best so far” of baseball history, “fascinating stuff, all of it.” He liked the “scholarship and humor, plus an insight into the game which only an ex-batboy of the Dodgers can offer.” He called the book “a thorough, carefully documented story of the game” that “explodes several myths and does a definite service to the game thereby.”

Amazingly, at least one organized baseball owner responded by writing a review. William E. Benswanger, former president of the Pirates, wrote in the Pittsburgh Press that the book is “of greatest interest to real old-timers.” He recognized the author’s “intensive research” and said he had produced “an engrossing work to deep students of the game.” The book, he thought, was “a worthwhile exposition of historical background . . . necessary . . . in order to understand present-day development. He thought it “a highly useful book for the student and for the collectors of baseball lore.”

And Ford Frick, then Commissioner of Baseball, wrote that he’d looked through the book “with a great deal of interest” and “It seems to be a solid and factual presentation of baseball.” Frick would have enjoyed the third volume, because he said that most researchers “forget that they are writing about an institutional game and confine themselves too much to organized and professional baseball. The real value of our baseball,” he commented shrewdly, “is the impact it has had on our people both as spectators and participants.”

RECOGNITION BY OTHER HISTORIANS

Historians, too, appreciated the book. A history professor, writing after publication, was Donald Grove Barnes, with whom I had myself studied history at Western Reserve University in Cleveland. (Barnes didn’t realize the connection between Harold Seymour the historian and Dorothy Seymour the student.) Barnes wrote for the American Historical Review that Baseball: The Early Years is “a serious study of the game” and “a good book,” one that “both historians and ordinary baseball fans will enjoy.” Professor Carl Wittke wrote in the Ohio Historical Review that the book is “an important volume,” admiring its “prodigious research” and saying Seymour “knows and loves his baseball, and he knows his American history, and so he has given us what is without question the best book on the subject.”

Librarian Robert W. Henderson, who had himself written an important article on early baseball, described the book accurately for the Journal of the New-York Historical Society as “the first scholarly history of baseball.” He pointed out that the book was “an extension of the Ph.D. degree . . . which adds to its authority while in nowise diminishing its readability.” Henderson said the book “will remain . . . the basic reference for baseball history.”

Several reviews recognized, as did the Louisville, Kentucky, Times, that Seymour was “an incurable fan.” Said the Jewish Exponent, “only a person with a life-long love for the game plus a scholar’s insistence upon fact and documentation could produce such a volume.” The result, said one reviewer, is “a fascinating, if brutally honest, history of America’s summer madness” that “will stand as authoritative.” In fact, said the St. Petersburg Times, the book is “in a class by itself.”

The San Francisco Chronicle predicted that The Early Years would become “half of what will be the most comprehensive, serious, authoritative and sociological study of baseball ever put to paper,” saying the book was “faithfully and lovingly told.” The reviewer described it as based on “the first Ph.D. thesis on baseball by a right-handed former batboy.”