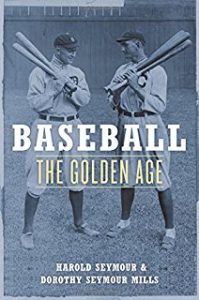 Continues the story of American baseball, carrying it from 1903 through 1930. The book focuses on professional baseball and its development. during an era when baseball enjoyed an unparalleled emotional grip on Americans.

When Seymour’s second volume, Baseball: The Golden Age, was published by Oxford University Press a decade after the first, Joseph M. Overfield, writing in the Niagara Frontier, recognized that “The same high standard of scholarship is continued in this book,” which was “well written.” Some reviewers compared the author with classical English writers. The London (England) Times Literary Supplement called it “fascinating” and “a remarkable book” by “a highly intelligent writer,” comparing Seymour to Hazlitt and calling him “a learned prose Pindar.” Writer Robert Cantwell of Sports Illustrated was preparing an article in which he called Seymour “The Gibbon of Baseball” but died before he could complete the piece. The London Guardian recognized the book’s solid analysis of “the economics of the situation” as applying to British football as well.

A review by Business Week declared that “this splendidly researched history, filled with delectable details, gives the reader a panorama of baseball from the early 1900s through the 20s.” The Boston Globe described it this way: “For anyone who ever scooped up a grounder, caught a fly, or beat out a bunt, this book is irresistible.”

James Bready of the Baltimore Sun admired Seymour’s balanced treatment of the Black Sox scandal of 1919. The Tacoma, Washington, News-Tribune asserted that Seymour “has managed to keep the readers entertained as well as informed,” saying it was “a valuable book.” Sports writer Shirley Povich wrote in the Washington Post that Seymour’s “love for the game is inescapable. So is his determined objectivity in exploring the rascally aspects of it.”

At the end of the year Jonathan Yardley reviewed several baseball books for the New Republic, calling The Golden Age “the most valuable of the books.” He pointed out that the fact Seymour is “obviously and ardently a fan . . . does not blind him to the greed, mendacity and callousness of owners,” which are pointed out with “devastating documentation.”

The book’s honesty about the events of the past were remarked upon by Ron Fimrite of Sports Illustrated, who said that Seymour’s “obvious affection for the game has not deterred him from recounting.greed.buffoonery.and chicanery.” In Chicago the Sun-Times reviewer spoke of the book’s “exhaustiveness” and “diligent research,” saying that the author “communicates an understanding of baseball as a reflector of American culture.” He further called the book “as indispensable to economists as it is to the enthusiast of so-called sports.”

In Cleveland, Howard Preston of the Plain Dealer called Seymour “a painstaking researcher” and “a thoroughly readable writer.”

Sports writer Leonard Koppett reviewed the book for Sporting News in August of 1971, declaring, “Anyone interested in baseball history should be grateful to Harold Seymour.” He went on, “What is so valuable about Seymour’s work is its method. He is a trained historian working from original sources as well as from previously published material. It’s not putting anyone else down to say that Seymour is the first author to put that kind of training and research teachniques fully to work on baseball history. The result is something special.” Then Koppett continued, “Seymour was the first.to attack the subject comprehensively. Nowhere else is there available so informative, so clear, so reliable and so well-ordered an account of what really went on. You can’t possibly understand the reasons for today’s baseball structure, or the forces at work in baseball’s past, without going through the material Seymour has sifted.” In sum, he said, the book performed “an invaluable service.”

One of the outstanding contributions of this book is its biographical sketches of important people of the period. Joe Overfield, who studied and wrote about Buffalo baseball history, pointed out that Seymour did “an exceptional job of portraying the leading characters . . . you will find striking portraits” of Landis, Ruth, Ban Johnson, and others. To Thomas Lask of the New York Times, the book “restores flesh and blood to men who have too long been cartoons from a sportswriter’s imagination.” In Boston, the Globe reviewer said that Seymour, as a historian, was “a first-class performer” and “has a knack of bringing personalities alive.” Although he “idolizes baseball,” he “treats the participants as a historian should: dispassionately.”

Ron Fimrite of Sports Illustrated reported the book as “the best honest history of baseball in its golden years of 1903 to 1930.” To the Chattanooga Times reviewer it was “thoroughly engrossing” and “the first serious study of baseball ever undertaken.” New York History Journal said The Golden Age “combined a fan’s love for the game.with a researcher’s interest.” Professor Robert Beisner in the American Historical Review called Seymour “that rare person, a batboy-turned-iconoclast, “not only a scholar but a baseball nut.”

The Ames, Iowa, Daily Tribune also called Seymour “a baseball nut of the first water” who “shatters some old myths and legends” in “a careful analysis of the history of baseball.” The Virginia Kirkus Service to librarians praised the book as “systematic, well-nigh exhaustive history” that is also “of interest to the average fan.”

FROM NEW YORK TO CALIFORNIA

Thomas Lask, reviewing the book in the New York Times, said Baseball: The Golden Age “will grip every American who has invested part of his youth and dreams in the sport.” Again the writer’s demolition of myths were praised: “Commonly-held beliefs are destroyed or challenged.” Although “not a debunker’s manual, the book “makes ignorance [of baseball’s past] indefensible.opening a weighty ledger for the scrutiny of all.”

The Long Beach, California, Independent praised the book’s “lively touch coupled with deep research.” Publishers Weekly called the book “fascinating” and “definitive,” saying it is “noteworthy for its thoroughness and for the way its author relates the sport to American life.” The PW reviewer appreciated that Seymour “has an eye for humorous detail.”

The Seattle Post-Intelligencer, in its Book World supplement, quoted Fimrite as saying that “no one has ever explored the national game so zealously,” adding that Seymour had “impeachable credentials.” To Fimrite this is “not merely a baseball book; it is social history at its best-the heart and mind of America.”

That Fall, Harvard history professor Franklin Ford reviewed the book for the Boston Sun Herald Traveler’s book guide, calling it “excellent,” with “admirable balance between history of baseball as a game and history of baseball as a business,” thus “giving baseball its due as a genuine force and outlet for the emotions of millions of people.” Ford particularly admired Seymour’s “careful assessment of Landis and said Seymour possessed “formidable qualifications” for writing the book, ending, “I’m with Dr. Seymour and grateful to him for having taken me along.”

Sports Illustrated Book Club boxed Volumes One and Two together for the club members and summarized them as “widely acclaimed by sportswriters and critics as the most comprehensive survey of the game ever to appear. Seymour’s carefully documented and well-researched books will be with us for many years to come as the sport’s only definitive history and most lively reference work.”

Looking to the future, the Providence Sun-Journal declared that Seymour “has now pitched two strong innings and is a good bet to take the baseball-history series.” That prediction was correct.