At that time Fenn, later called Cleveland State University, had no baseball team, so the only opportunity for Seymour to indulge his love of baseball was to work on his doctoral dissertation for Cornell University. As a Fenn student majoring in English, I was able to help him with his writing.

During the 1949-50 college year, the same year we were married, the Fenn administration decided it had to cut back on faculty, and a group of the instructors who had been hired last-Seymour among them-were released. He didn’t want to leave Cleveland while I was in the middle of my final year for my degree at Western Reserve, where I had transferred when we were married, so he took a position as vice president of the Cleveland Better Business Bureau while we worked steadily on his dissertation.

The resulting two-volume thesis impressed Cornell University so much that, although the time limit for presenting and defending the dissertation had long since passed, Cornell made an exception and awarded Seymour the Ph.D. in 1956. (See That Baseball Ph.D.) Then he began applying for academic positions in New York State.

In the fall of 1956 Seymour accepted a post as Vice President and Director of the University of Buffalo’s Office of Information Services, succeeding Sloan Wilson, author of the bestseller The Man in the Gray Flannel Suit. There he discovered that one of his responsibilities was to ghost-write the president’s speeches. That became my task, although I was also teaching preschool and training preschool teachers from the State University.

At Buffalo, Seymour delivered one of the University’s Newcomer Lectures: “What is Professional Baseball?” Someone also recommended him as a contestant for the television program, “The $64,000 Question,” and although he filled out the producer’s questionnaire it soon became apparent that his baseball knowledge was not of the type suitable for a trivia show!

Seymour missed teaching greatly and almost immediately began applying for positions in New York. He was teaching at Finch College, a women’s institution, in New York City, when Baseball: The Early Years was published. A former finishing school for mostly-wealthy young women, Finch hardly offered a venue for coaching baseball. At that time (the 1950s and 60s) nobody realized that, a hundred years earlier, young women had formed baseball teams in exclusive colleges! But in his classes Seymour did explain the importance of baseball as part of American history, and he took classes to the ball park for field trips.

Idea for a Course

Early in his career Seymour got the idea that college history should include baseball history. Back in the late 1940s he proposed a course in sport history to his colleagues at Fenn College (now Cleveland State University), but they found the idea unacceptable. 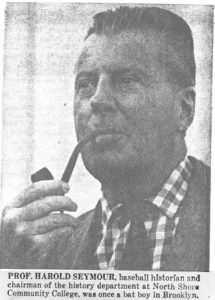 In 1966, when teaching for North Shore Community College in Massachusetts, he prepared a long and formal proposal called “Teaching History through the Medium of American Sports History,” but again the faculty rejected the idea. Now, of course, many college and university curricula include courses in sport history.

After leaving New York City Seymour taught in Middletown, New York, at a community college, where he found the students the best he’d ever taught. I, too, enjoyed reading (and marking) their thoughtful papers. While he worked there we lived in nearby Chester, and I taught in the town of Warwick. At this time I also published ten children’s books, so when the Newburgh Evening News reporter interviewed us, he photographed us together, mentioning my own publishing and calling us the “Chester Writing Team.” He was the only reporter ever to do so.

I never thought that one of my ten 1965 children’s books, Ann Likes Red, would become a classic, beloved of hundreds of children of the sixties and seventies who begged for it to be reprinted in 2001 so that they could share it with their own little children. 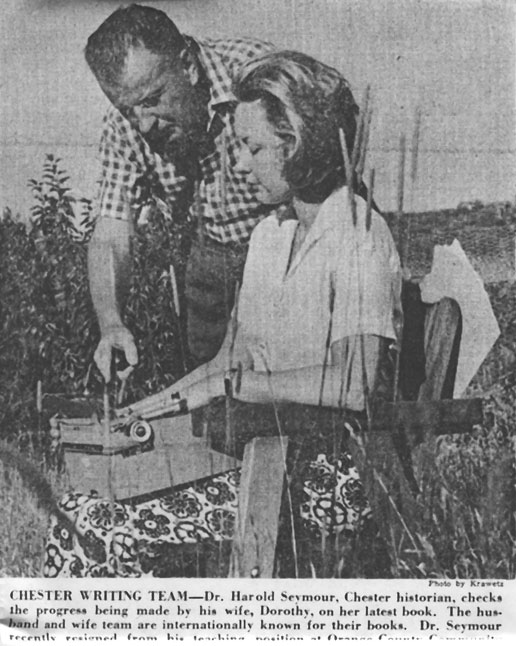 When we moved to the West of Ireland in 1973, the local newspaper, Western People, published in Ballina, County Mayo, interviewed us and headlined its story “The Baseball Don.” Here the term referred not to a Mafia head (!) but was the British/Irish word for “professor,” known in the British Isles as a “don.” The editor of Western People wrote that Seymour was “the foremost living authority upon the American game of baseball,” pointing out that we had shipped our entire library to County Mayo because of its “peace and tranquility” and “the friendliness of the people” as well as to escape the frenetic pace of American life. All of this was accurate.

After we had moved from Ireland back to the United States and were settled in New Hampshire, a British writer, Huw Richards, phoned to ask for an interview while he was visiting in the States in 1991. He came to our home in Keene and took notes on Seymour’s responses to his questions, then reviewed several books for the London Times Higher Education Supplement, remarking, “This rich stream of American history owes an immense amount to Harold Seymour, now 81 and a powerful exemplar of everything coming to him to waits. Today he is recognized as the father of academic sports history in the United States.”