Thanks to the University

In his will Seymour arranged to honor Cornell, which was first to recognize baseball as a legitimate subject for academic inquiry and awarded him the Ph.D. degree for his dissertation on the early history of baseball. His bequest took several forms. He set up a fellowship in American history for a graduate student to study sports history. He also planned an annual invitational lecture on sports history at Cornell, called the Harold “Cy” Seymour lectureship in Sports History.

And he named Cornell as recipient of all our baseball books and materials, with funds to support the archive, in the hope of forming the nucleus of a sports history center. Cornell announced the gift in the fall of 1990. After Seymour’s passing in the fall of 1992, I notified Cornell that I was packing everything related to baseball, and the entire Collection was picked up by van in January of 1993. 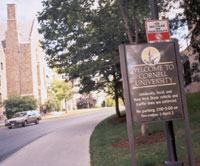 The fellowship and the lectureship will not be funded until after my own passing, but the Seymour Collection of materials at Cornell University is open and already in use by other scholars. Accessioned as “The Harold and Dorothy Seymour Papers,” it is housed at the Carl A. Kroch Library at Cornell, which is the repository of the Division of Rare and Manuscript Collections for Cornell University.

The Seymour Collection, besides books, includes seventy-one boxes of correspondence, publicity, notes, photos, computer disks, microfilms, and other documents and records pertaining to the history of baseball, as well as personal papers relating to Harold Seymour and me.

Serious researchers can examine the Collection by appointment with the curator of the archives, Elaine Engst. During my own latest visit to the archives in July 2001, to perform research for this web site, I spent a week selecting material to quote from and to have photocopied. Elaine Engst and her staff proved most cooperative, and I had some photographs taken at the Kroch Library to show what researching there is like.

The Carl A. Kroch Library is one of Cornell’s nineteen libraries and, like many University Buildings, is situated at the top of a hill. To enter it, you use the entrance to Olin Library and walk through it to a set of elevators, which take you down to the Kroch Library, located almost completely underground. Two skylights with mirrors reflect outdoor light into its central three-story atrium.

Cornell, as you may know, is built on a hill above the city of Ithaca and Cayuga Lake. In fact, the University’s song starts out “Far above Cayuga’s waters,” and by the time you climb up to the top of that hill you feel at least a thousand feet above everything-until you descend into the Carl A. Kroch Library, which is built into the hill and has 97,000 square feet of space and more than 30 miles of shelving. The building is controlled for correct temperature and humidity, because many items in its collection are fragile. Like other rare book and manuscript libraries I’ve used, its managers have set special rules for use of its collections in order to protect the materials.

Books and Other Research Items

The largest part of the Seymour Collection consists of the hundreds of sports books and other printed materials that Seymour and I collected over a 40-year period. That includes microfilm, too, especially of various sports dissertations, purchased from University Microfilms at Ann Arbor. The photo collection includes the original photos we collected for the three books, along with photos not used in the books, like those of early foreign teams.

One unusual item is a filmed interview that Ken Burns conducted with Seymour in our New Hampshire home, unfortunately filmed during the last year of Seymour’s life, when he was showing marked signs of the Alzheimer’s Disease that had affected him for so long. The results of the interview were unusable in Ken’s baseball film, he told me, but I persuaded Ken to donate the film to Cornell so that it could be part of the Collection there. I’ve never viewed this film.

Manuscript material in the Collection includes our correspondence with baseball figures like Bart Giamatti, Lee Allen, Gene Murdoch, Joe Overfield, and George Toporcer, as well as responses from the many people and organizations I wrote to for baseball information. Seymour’s own articles are of course represented in the Collection.

The most specialized and unique part of the Collection, however, is the set of original research notes on which all three of the Seymour books were based. All the research notes for the books, including the notes that were taken but not used, are stored there. When you examine the Finding Aid for the Collection, for example, you learn that the notes for the first volume, Baseball: The Early Years, are labeled boxes 26 through 28. Those for Volume 2, Baseball: The Golden Age, are in boxes 25, 29, and 30. The notes for the third volume, Baseball: The People’s Game, are in boxes 31-38.

Because Seymour’s publisher, Oxford University Press, declined to publish chapter notes or footnotes, researchers often ask me where we found information on a particular detail. Sometimes I can remember, since I took the notes. If not, and they need the information for their writing, they can perform their own research by checking the appropriate box of the Collection, since I organized all notes by the book’s chapters and topics.

Also available in the Seymour Collection are the outlines I prepared for each chapter. As the books were being prepared, we used the following system: I did most of the research; I selected and organized the notes that I considered the appropriate notes for a chapter he was planning to write; and then I wrote a comprehensive outline of those notes, citing the source of each point in parentheses within or after each sentence. Seymour then wrote from my outlines rather than from the original notes. That made the work easier and faster for him.

At first, after the chapter was completed, I threw these outlines away. (Chapter’s done; discard first drafts, right? Wrong.) Later, when I began to realize the value of these comprehensive outlines with their internal citations, I began saving them, so they remain in the Collection, too. Using these outlines is an easier way of finding the source of a particular point made in the chapter.

Many of the research notes in the Seymour Collection are for material never included in the three published volumes. So if you’re looking for ideas for the period of the 1950s, for example, you’d be able to look through Boxes 10-24, which houses the research notes for a proposed fourth volume to cover the era of the thirties through the sixties, a volume that was, of course, never written. A large collection of research notes on foreign baseball, especially Japanese baseball, is in boxes 39-40. The notes are organized topically or by country.

The Cornell University Librarian, Alain Seznec, in his letter to Seymour accepting the gift of the Seymour Collection, made these remarks: “Sports and, most especially, baseball, is an important part of the social history of the United States. Your leadership in recognizing this fact and your pioneering efforts to bring sports within the purview of scholarly research has provided important insights into our society.”

To receive a copy of the Finding Aid describing the contents of the seventy-one boxes in the Collection, or to make an appointment to visit the Kroch Library for research, contact Elaine Engst, Curator, Rare and Manuscript Collections, The Carl A. Kroch Library, Cornell University, Ithaca, NY 14853-5302, phone 607-255-3530, fax 607-255-9524, or via email, ee11@cornell.edu.